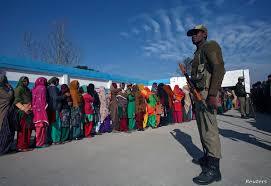 Amid stringent security measures counting of votes took place in Kashmir’s capital Srinagar. The alliance of local parties emerged victorious by winning a maximum number of seats in the local administration.

The elections in Kashmir come at a time when all the political processes in the region were halted after New Delhi stripped Kashmir’s semi autonomous status in August 2019.

India’s unilateral decision has not been accepted by the local Pro-India political parties in Kashmir and they aim to fight the decision.

victorious candidates and supporters perceive this win as a victory of people’s verdict against what they call BJP’s propagandist narrative on Kashmir.

Political analyst Gowhar Geelani says the results have clearly showed that the people of Kashmir stand by the ‘peoples alliance.’

But at the same time Gowhar Geelani is critical of these local pro India political parties considering their track records.

Out of total 280 seats, the People’s alliance is leading followed by BJP, Indian National congress and others.

The local elections results in Indian controlled Kashmir are seen by many as a new political chapter that would determine the future political discourse of this Muslim majority region.

Analysts say considering the political history of Kashmir, a deep rooted mistrust in New Delhi and local pro India parties persists and people here only seem to be choosing the lesser evil.