Thursday, 24 December 2020_The Palestinian Refugees Committee in the Gaza Strip organized a rally against the UN aids and health services reduction. 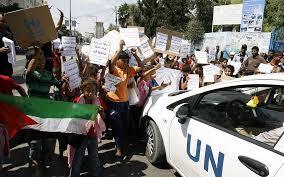 Palestinian refugees who have impacted badly by this reduction, participated in the demonstration calling for the world body's attention to the dire condition in the impoverished enclave.

Palestinians believe the reduction in aid services by the United Nations Relief and Works Agency for Palestine Refugees (UNRWA) is an attempt by the US to liquidate the humanitarian organization. Earlier, the US announced plans to withhold 65$ million of aid to the UNRWA until further notice.

The demonstrators call on the international community to reverse the reduction decision by the UN and keep on supporting the Palestinian refugees who have lost their lands and were expelled since 1948.

UNRWA was established to aid the 700,000 Palestinians who were expelled from their homes during the war surrounding Israeli occupation's establishment in 1948.

More than half of the two million people in the Gaza Strip are dependent on support from UNRWA, and depriving them of the services they need will worsen their living conditions.