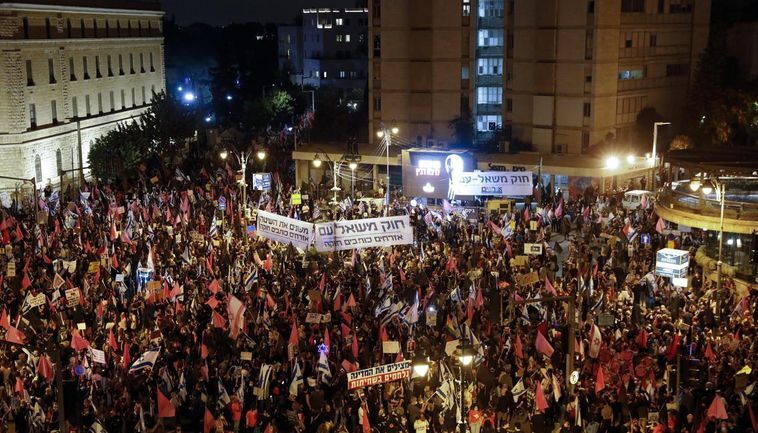 Hundreds of demonstrators carrying torches began protesting against Prime Minister Benjamin Netanyahu's continued leadership amid his indictment for fraud, bribery and breach of trust for the 27th consecutive week on Saturday near his residence on Balfour Street in Jerusalem.

As clashes broke out early on in the demonstration, three protesters were detained. Israel Police stated that they blocked the intersection of Tudela and Gaza streets – two streets neighboring the protest center of Paris Square.

The demonstration began earlier than usual in an attempt by protesters to surprise the police and circumvent its blockades, which are usually erected later in the evening.

Despite police preparations, protesters were able to reach and block the main entrance into the prime ministerial residence, which has been covered in a black curtain, chanting on police forces to "drop the curtain."

One of the largest movements leading the protest, the Black Flags Movement, said in a statement that "the protest overthrew the bad and failed government, and it is the one that will bring down the accused [prime minister] who has abducted the country and is running the head of a criminal organization."

The statement added a personal message to Netanyahu, saying "Bibi, very soon the curtain will be lifted and Israel will be cleansed of your political sabotage and corruption. Neither the quarantine nor the announcement of elections will stop us. We will get as close as we can to you, and not just on Saturdays. We will come to you from every direction. We'll close on in you until you leave!"