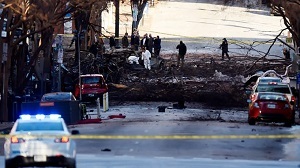 Drake did not say if there are any other people of interest in the case, but confirmed law enforcement is considering every possibility and following up on all leads.

FBI agents have searched a home in Antioch and visited a real estate office in Nashville in connection to the bombing. An FBI spokesman confirmed Warner lives at the home federal agents searched Saturday afternoon.

Owner Steve Fridrich said the company reported to the FBI that Warner had previously worked for the company. He confirmed speaking with agents Saturday.

“We are one of the nearly 500 people who so far have contacted them with tips," he said.

Fridrich said Warner was hired four or five years ago as a contract laborer for computer consulting for the company. Then this month, Warner informed the company in an email that he'd no longer be working for them, Fridrich said.

No reason was given.

“He seemed very personable to us – this is quite out of character I think," he said.

“He didn’t have a computer or office here. If a computer went down he would fix it or if we got a new one in he’d put it together for us,” Fridrich said. “He'd come by once a month to the office to do work. But there were also months we went without seeing him. He also worked for other companies doing computer work.”