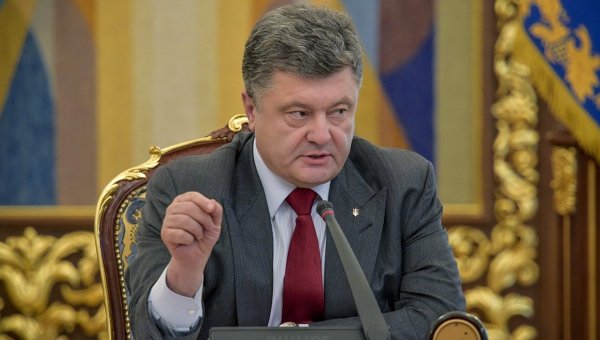 "All residents of Donbas, 100 percent, want peace! I am ready to fight for their country. And I am convinced that a lot of people in Ukraine think the same. Territorial integrity, sovereignty and Ukrainian independence will remain as they are!” the Ukrainian president wrote on his Facebook page.

On the eve of the second meeting in Minsk of a trilateral contact group with representatives from Ukraine, Russia and the Organization for Security and Co-operation in Europe (OSCE) to resolve the conflict in Ukraine, both Kiev authorities and rebel forces agreed on a truce that started at 6:00 p.m. Kiev time (15:00 GMT) on Friday.

During the talks in Minsk, Kiev and militia leaders agreed to a ceasefire, the international monitoring of its implementation, the exchange of all prisoners and the opening of humanitarian corridors. These arrangements were among the Russian President Vladimir Putin’s seven-point plan to resolve the situation in Ukraine.

Poroshenko claimed the agreement is based on his own peace plan, although the truce was established after Putin’s call for a ceasefire.
Share to
Tags
Ukraine ، Poroshenko ، Russia ، Territorial Integrity
Your Comment