Wednesday, 30 December 2020_US President Donald Trump has targeted the “weak and tired” Republican leadership calling on his own party not to allow Democrats to “steal” the 2020 presidential election. 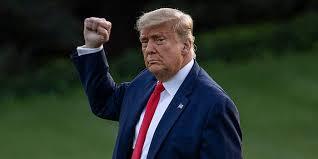 “If the Republicans stole a Presidential Election from the Democrats - All hell would break out. Republican leadership only wants the path of least resistance. Our leaders (not me, of course!) are pathetic. They only know how to lose!” Trump said on Twitter Tuesday.

The lame-duck made the comments after congressional Republican leaders allowed a veto override of defense policy legislation, known as National Defense Authorization Act.

“Weak and tired Republican ‘leadership’ will allow the bad Defense Bill to pass. Say goodbye to VITAL Section 230 termination, your National Monuments, Forts (names!) and Treasures (inserted by Elizabeth “Pocahontas” Warren), 5G, and our great soldiers being removed and brought home from foreign lands who do NOTHING for us,” he said.  “A disgraceful act of cowardice and total submission by weak people to Big Tech. Negotiate a better Bill, or get better leaders, NOW! Senate should not approve NDAA until fixed!!!”

He also repeated allegations of election fraud in Pennsylvania and other swing states in tweets tagged by Twitter as containing “disputed” claims.

Trump also urged Senate Republicans to approve an increase in the recently-authorized stimulus payments from $600 to $2,000 as soon as possible, saying it would be a “death wish” not to do so.