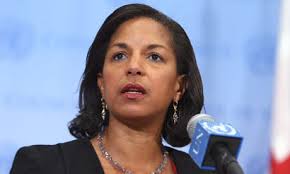 National Security Advisor Susan Rice's trip comes at a turbulent time in US foreign policy and just two weeks after Washington accused a Chinese fighter jet of buzzing one of its surveillance planes.

It also comes ahead of a one-on-one summit between Obama and Chinese President Xi Jinping that is being planned to coincide with the US leader's visit to the Asia Pacific Economic Cooperation (APEC) summit in Beijing in November.

Obama "views this visit as an important milestone in the development of our important relationship," Rice said at the opening of her meeting with Chinese State Councillor Yang Jiechi and Chinese ambassador to the US Cui Tiankai.

"The president asked me to travel here -- even as there are many other issues on our shared global agenda -- because of the priority he attaches to US-China relations," she added.

Yang said that he looked forward to discussing "China's core interests and major concerns", as well as working to "constructively manage our differences on sensitive issues to ensure that the US-China relationship will continue to move forward".

The trip -- which is also expected to include meetings with Xi and Chinese Foreign Minister Wang Yi -- is Rice's first to China as national security advisor.

It is intended as a signal that, despite being pulled into a new conflict in the Middle East against the Islamic State and being consumed by a showdown with Russia over Ukraine, Washington remains committed to its policy of reorienting US power to Asia.

Rice is in Beijing after China told the US to end air and naval surveillance near its borders, which it said was damaging relations between the Pacific powers and could lead to "undesirable accidents".

The latest incident took place last month, when a Chinese fighter jet flew less than 30 feet (nine metres) away from a US surveillance aircraft near China's Hainan island in an episode that recalled a standoff over a downed US spy plane in the same area in 2001.

The US insists the area is international waters, but Beijing regards it as part of its territory.
Share to
Tags
Susan Rice ، US ، china
Your Comment