MOSCOW, September 8 (Itar-Tass) - Russian Prime Minister Dmitry Medvedev said he hopes the crisis in Ukraine's southeastern regions will be resolved but added that the goodwill and delicate work of all sides to preserve peace will be required. 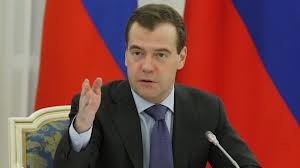 "Unfortunately, the Ukrainian crisis continues. It's a very serious drama. But I hope it will be settled if the Ukrainian leadership has goodwill and Russia's proposals are used," Medvedev said in an interview with the Vedomosti business daily.

He recalled that Russian President Vladimir Putin suggested a peace plan a few days ago and Ukraine "seems to have accepted it." Southeastern militias also accepted the plan but with some reservations, he added.

"So delicate work aimed at preserving peace should now be conducted. I hope it will work," he said.

Russian President Vladimir Putin suggested a seven-item plan to settle the crisis in Ukraine after a phone conversation with his Ukrainian counterpart Pyotr Poroshenko on September 3.

The plan in particular calls for an end of active offensive operations by armed militia groups in southeast Ukraine and withdrawal of Ukrainian army units to a safe distance, for international monitoring of compliance with the ceasefire and an exchange of prisoners.

The trilateral Contact Group on Ukraine (Russia, Ukraine and the Organization for Security and Cooperation in Europe) and representatives of the self-proclaimed Donetsk and Lugansk People's republics (DPR and LPR) agreed in Minsk on September 5 on cessation of fire in Ukraine's embattled southeast.

Fierce clashes between troops loyal to Kiev and local militias in the southeastern Ukrainian Donetsk and Lugansk regions during Kiev's military operation to regain control over the breakaway territories have killed hundreds of civilians, brought massive destruction and forced hundreds of thousands to flee Ukraine's southeast.
Share to
Tags
Medvedev ، ukraine ، goodwill
Your Comment