Al-Nujaba spox: We will break the Zionists’ intelligence boycott

News ID: 50265
Religion » Religion
Font Size
Print Send to firend
Save
At the ceremony for the unveiling of the Hebrew website:

Al-Nujaba spox: We will break the Zionists’ intelligence boycott

Tuesday, 19 January 2021 (YJC) _Nasr al-Shammari highlighted the fact that one of the goals of the movement is to address the depths of the Israeli enmity. 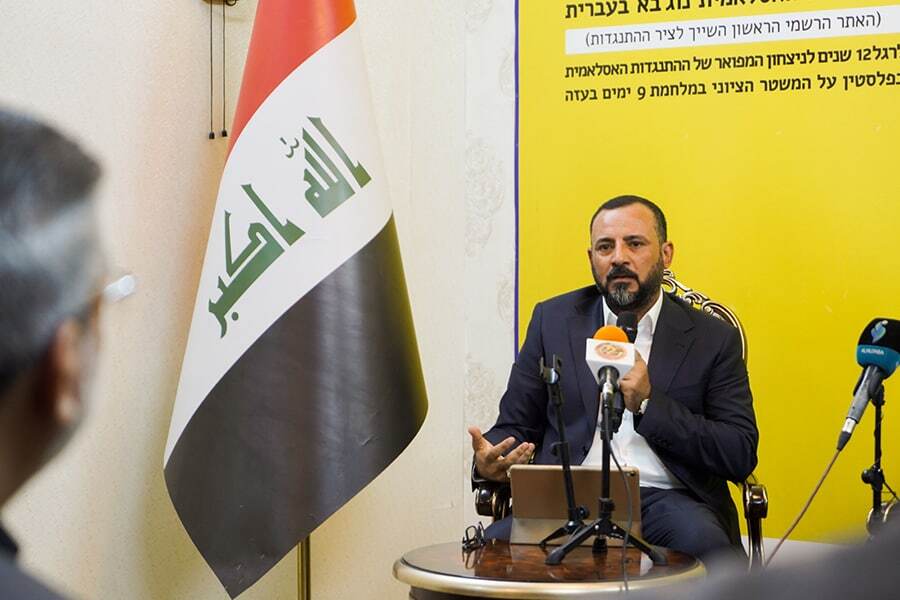 Speaking at the ceremony for the unveiling of al-Nujaba’s official Hebrew-language website, Nasr al-Shammari stressed that one of the goals of this movement is to address the depths of the Israeli enemity and to break the intelligence boycott of the Zionist regime.

According to the Communication and Media Affairs Centre of al-‎Nujaba in Iran, the ceremony was held as Ahmad Aql, the Palestinian ambassador to Iraq, and Nasr al-Shammari, the movement’s spokesman, gave speech in the presence of both representatives of the Islamic Resistance groups and a group of political analysts in Baghdad.

The spokesman of the al-Nujaba Islamic Resistance movement emphasized the importance of the media in the equations of war with the enemies and said, “At present, no longer is the media a part of the battle as it describes as three-quarters of it. Media is the only weapon with which, regardless to their distance, the enemy forces can be targeted.”

al-Shammari explained, “In the past, we have witnessed both the creation of Arabic (media) channels and pages and the emergence of Arabic-speaking spokesmen by the enemy to sow discord” and reiterated, “Today, we use the same weapon, which was exclusively under their control in the past, to target the enemy. From now on, we will address the depths of the enemy, including its supporters and popular bases, to inform them of all the crises and catastrophe that awaits them in the future, which is boycotted by the Zionist regime.”

He added, “The opportunity for the Zionists is short and we have now entered the process of the decline of that regime. The same path that Martyr Qasem Soleymani defined and Martyr Abu Mahdi al-Muhandis moved on, continues until the liberation of al-Quds and we go to their houses – the place which is the source of all conspiracies.”

The deputy secretary-general of al-Nujaba said, “The government that feels most threatened by the media is the Zionist regime. Israel is a regime and a society based on the distortion and exaggeration of the median and which tries to demonstrate its invincible power and army but today we see that in the face of the Islamic Resistance, it has suffered from disastrous defeats.”

al-Shammari said that the only language the Zionist regime and the Americans understand is that of force, while pointing some of their plans such as “establishing two states” or “normalizing relations with the Zionist regime” will never be the solution to peace and tranquility in the region, and added “the solution to the region is nothing but to resist against the American and Zionist occupiers.

At the end, he referred to Iraq’s position on the “compromise project” and said, “as part of the Islamic Resistance Axis in the region, Iraq cannot take a neutral position in the struggle of the oppressed Palestinian people against the occupying Zionist regime and as long as part of Palestine is occupied by the Zionist regime, Iraq and the region, in general, will never be at peace.”

Share to
Related News
The Iraqi government is not serious in prosecuting the killers of Haj Qasem and Abu Mahdi | US embassy in collusion with mercenary politicians
Al-Nujaba: The path of the martyrs Soleymani and al-Muhandis continues
We hope to pray in the Sacred House of God soon | Congratulations to Yemen’s ‎Ansarullah!‎
al-Asadi: Arab regimes are overtaking Israel in destruction
Tags
Al-Nujaba ، nujaba movement ، Iran ، Iraq ، zionist regime ، israel
Your Comment