(CNN) -- U.S. Secretary of State John Kerry said Egypt had a critical role to play in countering extremism, as he met with Egyptian leaders in his latest effort to build regional support for President Barack Obama's strategy to combat ISIS. 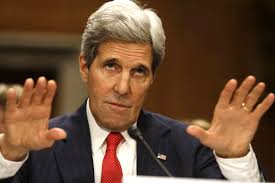 His stop in Cairo follows talks with leaders in Turkey on Friday and meetings with Arab leaders in Jeddah, Saudi Arabia, a day earlier.

Egypt, a country whose population makes up a quarter of the Arab world, has great influence in the region as an intellectual and cultural capital, Kerry told a news conference in Cairo.

As such it can play a central role in the global fight against terrorism and extremism, he said, adding that this had been an important feature of the Arab leaders' discussions in Jeddah.

The ideology of ISIS has "nothing to do with Islam," Kerry said.

"It is increasingly clear that its message of hate is rejected by the overwhelming majority of Muslims around the world.

"I've heard this loud and clear from leader after leader in Muslim states that I've visited and it is clear in the pronouncements of religious leaders around the world."

'No place in modern world'

Kerry also spoke of the need for international partners to support the new government in Iraq, not only militarily but with humanitarian aid, addressing illicit funding stream reaching ISIS and stopping the flow of foreign fighters.

Kerry said efforts to move forward the coalition against ISIS would continue Monday in Paris, where France is hosting an international conference on the crisis in Iraq.

The Australian government is preparing to deploy up to 10 aircraft, including up to eight combat aircraft, to the United Arab Emirates in response to a U.S. request to contribute to the coalition, the Australian prime minister's office said Sunday.

"We are not deploying combat troops but contributing to international efforts to prevent the humanitarian crisis from deepening," Prime Minister Tony Abbott's office said in a statement.

The threat posed by ISIS will also be on the agenda of the upcoming U.N. General Assembly meeting in New York, Kerry said.

Almost every country in the world can help in the fight against the Sunni extremist group, he said. "The bottom line is that terrorists like ISIL have no place in the modern world but it's up to the world to enforce that truth." The U.S. government refers to ISIS as ISIL, while the group now calls itself Islamic State.


'Acute threat'
A senior State Department official told reporters on the way to Cairo that a "broad consensus" was reached in the Jeddah talks that the threat posed by ISIS is the most acute in the region.

This threat "crosses borders, and if it isn't stopped, would increasingly expand beyond borders," the official said.

"So that is why, not just Egypt, but all countries in the region need to focus not just on whatever parochial counterterrorism and other issues that they need to resolve, but also this broader threat to the region and beyond."

Obama outlined a plan in a speech Wednesday to "dismantle and ultimately destroy" the Sunni extremist group that has seized a swath of territory across Iraq and Syria.

ISIS has said it's bent on creating an Islamic "caliphate," where harsh Sharia law governs every aspect of life.

"We need air support and not soldiers on the ground," al-Abadi said.
U.S. forces have already carried out more than 150 air strikes against ISIS targets in Iraq.

Obama said Wednesday that the U.S. counterterrorism operation could include possible airstrikes in civil war-torn Syria.

He also said 475 more U.S. military advisers will head to Iraq, raising the total of American forces there to 1,700 for a mission originally described as limited.

In addition, Obama shifted $25 million in military aid to Iraqi forces, including Kurdish fighters in the north combating the ISIS extremists. The aid could include ammunition, small arms and vehicles, as well as military education and training, State Department spokeswoman Marie Harf said.

It's not clear how soon U.S. forces will launch operations in Syria.

New U.S. envoy to join coalition
Kerry announced Saturday his appointment of retired Gen. John Allen as special presidential envoy for the new coalition to fight ISIS, to be joined by Deputy Assistant Secretary of State Brett McGurk. Both will begin work immediately, according to Kerry's statement.
Share to
Tags
John Kerry ، Egypt ، ISIS ، US ، Australia
Your Comment