Thursday, 25 February 2021_China’s military has slammed the United States for undermining regional “peace and stability,” after a US NAVY warship once again sailed through the Taiwan Strait, which separates self-ruled Taiwan from mainland China. 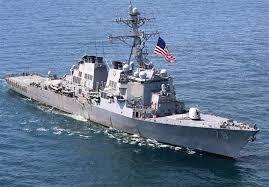 In a statement on Thursday, a spokesman for the People’s Liberation Army’s Eastern Theater Command denounced Washington for sailing the American guided-missile destroyer USS Curtis Wilbur through the Taiwan Strait on Wednesday.

The statement condemned the US conduct as undermining regional “peace and stability,” while the Navy’s 7th Fleet claimed that it had carried out a “routine transit.”

American warships periodically carry out voyages through the strait, drawing responses from China, which has sovereignty over self-ruled Taiwan. Under the “One China” policy, almost all world countries recognize that sovereignty.

The US, too, recognizes Chinese sovereignty over the island, but in an attempted affront to China and in violation of its own official policy, America constantly sells weapons to the island, bypassing Beijing, and avidly supports its secessionist president Tsai Ing-wen, besides the military deployments to the Taiwan Strait.