Saturday, 27 February 2021_Ott Tanak has dominated the opening day of the Arctic Rally Finland after winning the first two stages. 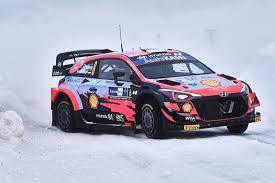 The Estonian, who had already set the fastest time in the shakedown on Friday, ended the opening day on the snow and ice-covered roads 16.2 seconds ahead of Hyundai team-mate Craig Breen.

Irishman Breen finished second in the opening stage and third in the second one. Kalle Rovanpera was third, 9.4 seconds ahead of Thierry Neuville.

The race continues on Saturday, with six special stages over 144 km through the snow-covered forests. The Arctic Rally replaces Rally Sweden, which was cancelled due to the coronavirus pandemic.