Saturday, 27 February 2021_Colombia on Friday (February 26) launched a new military unit to target coca crops and cocaine production, illicit mining, and the illegal armed groups who use such activities for financial gain. 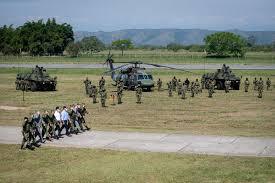 Colombia on Friday launched a new military unit to target coca crops and cocaine production, illicit mining, and the illegal armed groups who use such activities for financial gain.

Colombia's decision to launch the unit, known as CONAT in its Spanish initials, comes while the country is preparing to restart aerial spraying of coca crops with the herbicide glyphosate - possibly starting at the end of March - depending on the government receiving approval from the Constitutional Court.

"The unit was born to hit, repress, and break down the structures of drug trafficking and transnational threats linked to illegal mining, the trafficking of wildlife and people, and - of course - any transnational form of terrorism," President Ivan Duque said at a military base in Tolemaida.

Colombia, considered the world's leading producer of cocaine, suspended aerial spraying of glyphosate in 2015 following warnings by the World Health Organization that the chemical was potentially damaging to health and the environment.

The new unit, consisting of 7,000 personnel, will be deployed to zones such as the Catatumbo region on the border with Venezuela, as well as the provinces of Cauca and Putamayo, Defense Minister Diego Molano said.

Colombia faces constant pressure from the United States, a major destination for cocaine, to reduce the size of crops of coca, the drug's chief ingredient.

During 2019, coca crops covered some 154,000 hectares (over 380,000 acres) in Colombia, with a potential to produce 1,137 tonnes of cocaine, according to the United Nations Office on Drugs and Crime. There are no figures available for 2020.

The armed forces eradicated 130,000 hectares (321,240 acres)of coca last year, according to the government, and seized 500 tonnes of cocaine.