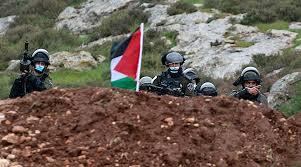 The parliamentarian said in a letter addressed to European foreign ministers and EU foreign policy chief Josep Borrell that the administration of former US President Donald Trump had left the Israeli-Palestinian conflict “farther away from peace than ever”.

"The Biden administration presents a chance to correct course," the politicians, including members of national legislatures and senates, as well as members of the European parliament said in the letter, cied by Agence France-Presse.

He sparked controversy by officially recognizing Jerusalem al-Quds as the Israeli "capital" in December 2017, before moving the US Embassy there from Tel Aviv in May 2018.

Israel lays claim to the entire Jerusalem al-Quds, but the international community views the city’s eastern sector as occupied territory and Palestinians consider it the capital of their future state.

Palestinians, who seek an independent state in the occupied West Bank and Gaza, with East Jerusalem al-Quds as its capital, have condemned the US pro-Israel agenda.

Emboldened by the anti-Palestine policies of Trump, Israel stepped up its settlement expansion in defiance of United Nations Security Council Resolution 2334, which pronounces settlements in the West Bank and East Jerusalem al-Quds “a flagrant violation under international law.”