Two US senators have introduced bipartisan legislation to take back the White House's authorization for the use of military force in the Middle East, a week after President Joe Biden ordered an attack on the Iraqi-Syrian border. 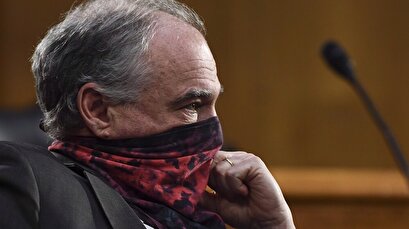 Democratic Senator Tim Kaine and Republican Senator Todd Young led the Wednesday measure, which would repeal 1991 and 2002 Authorizations for the Use of Military Force (AUMF) against Iraq.

In a statement, the senators said the bill is an effort to prevent the future misuse of the expired Persian Gulf and Iraq War authorizations, but added that “repealing these authorities will not impact ongoing US operations to counter ISIS (Daesh).”

The move came a week after the administration of Joe Biden conducted its first illegal military action inside Syria to target the facilities of Iraq’s Popular Mobilization Units (PMU). The attack killed one and wounded four others.

“Last week’s airstrikes in Syria show that the Executive Branch, regardless of party, will continue to stretch its war powers,” Kaine said. “Congress has a responsibility to not only vote to authorize new military action, but to repeal old authorizations that are no longer necessary.”

The US caused considerable tension in Iraq with the assassination of top Iranian anti-terror commander Lieutenant General Qassem Soleimani and his Iraqi comrade Abu Mahdi al-Muhandis, the deputy head of the PMU, near Baghdad International Airport in January last year.

The United States’ positions in Iraq have been targeted several times since the assassination, which was directly ordered by former US President Donald Trump.

Under the US Constitution, Congress, not the president, has the right to authorize war.

Young described the war authorities as “outdated”, saying Congress has been operating on “autopilot” in recent decades with regard to authorizing the use of military force.

“Congress must not shy away from this debate and I look forward to working with my colleagues on the Senate Foreign Relations Committee to advance this important legislation,” he added.

“For decades, administrations of both parties have kept these authorizations on the books to justify military action in the region without returning to Congress to make their best legal case for the need for such action,” Duckworth said.

“I’m proud to join this bipartisan resolution that would repeal these outdated war authorities and I hope we can work in a bipartisan way to address war powers.”

Other members of Congress have in recent days criticized the Biden administration for the strike conducted in the early hours of Friday, questioning the legality of the move.

“Military action - in a country where Congress has not authorized war - is unconstitutional in almost all circumstances,” Democratic Congresswoman Ilhan Omar said in a statement.