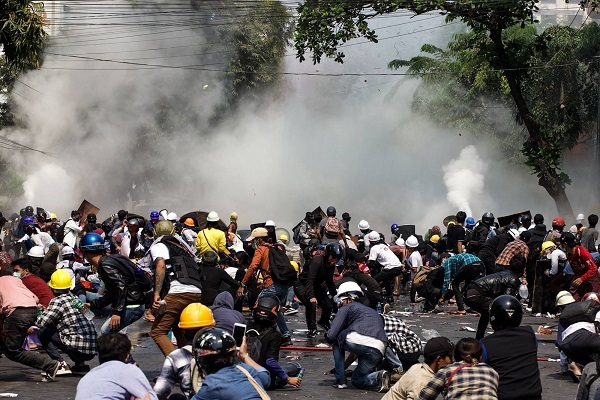 Security forces killed at least 38 protesters in Myanmar on Wednesday, as they dramatically escalated their crackdown on protests against last month’s military coup.

It is the highest daily death toll since the military takeover on February 1, which led to widespread protests in a number of cities in the country.

The death toll was reported by United Nations envoy to the country, Christine Burgener, who said “today was the bloodiest day” since the start of the coup.

The UN Human Rights Office said 18 people were killed on Sunday. According to Save the Children, at least four children have been killed since Sunday.

The charity said in a statement that "the brutal scenes of violence and death are reminiscent of a battlefield, with security forces using live ammunition to shoot at unarmed protestors, many of whom are young adults."

"A significant number of children have been wounded, and children are also suffering from the effects of teargas that is leaking into their homes," it warned.

The international community has been slow to respond to the violence perpetrated by security forces against protesters who have continued to take to the streets despite the threat to their safety.

Videos from Wednesday showed security forces firing slingshots at demonstrators, chasing them down and even brutally beating an ambulance crew.

Police have been firing tear gas, rubber bullets, and live rounds to disperse protesters, as well as arresting them en masse.

The military seized power and ousted the elected government of leader Aung San Suu Kyi at the start of February, in a coup that reversed years of slow progress towards democracy in the south-east Asian nation, after five decades of military rule.