Sunday, 07 March 2021_President Hassan Rouhani has reaffirmed Iran’s opposition to any foreign interference in Iraq, saying security, integrity, peace and tranquility in the Arab state are among top priorities of the Islamic Republic. 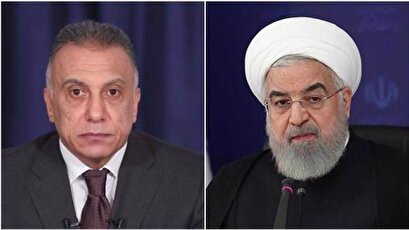 “We oppose any foreign interference in Iraq’s internal affairs and consider it a detriment to this country and the entire region,” Rouhani said in a phone call with Iraqi Prime Minister Mustafa al-Kadhimi on Saturday.

He added that the presence of US troops in regional countries, including Iraq, is the cause of instability and insecurity, saying, “The Americans have always played a destructive role in the region.”

He emphasized that speedy implementation of legislation by the Iraqi parliament on expulsion of American forces from Iraq can “help restore peace, stability and tranquility to the country and the region.”

The Iranian president said regional issues should be settled by countries in the region and expressed Tehran’s readiness to cooperate with regional states toward promotion of security and peace.

He said He added that the improvement of economic relations between the two countries in parallel with political ties is very important given both sides’ great capacities and stressed the importance of bolstering Tehran-Baghdad cooperation in all fields.

He noted that accelerating visa issuance for enterprises and private investment firms can help strengthen cooperation.

Elsewhere in his remarks, Rouhani pointed to billions of dollars of Iranian assets frozen illegally in Iraqi banks and emphasized that the financial resources should be released as soon as possible.

The Iraqi prime minister, for his part, commended Iran’s assistance in the establishment of security and stability in his country and said the United States has imposed illegal and cruel sanctions both on Tehran and Baghdad.

Kadhimi also said that Baghdad would make its utmost efforts to for the complete lift of the sanctions against Iran”.

He also noted that a special committee has been set up in Iraq to facilitate transit of commodities with Iran.