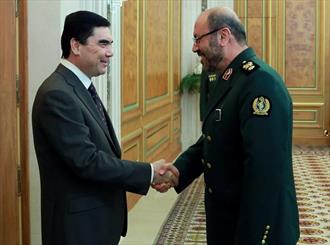 He the remarks in a meeting with the Turkmen President Gurbanguli Berdymukhamedov in Ashgabat on Tuesday.

"Given its extensive experience in the fight against these ominous phenomena of terrorism and drugs, the Islamic Republic of Iran is ready to transfer its know-how to the neighboring countries and cooperate with them in these fields,” the brigadier general stated.

He added that Iran is also prepared to strengthen cooperation with Turkmenistan, particularly in defense and security fields.

Dehqan emphasized that bilateral defense and security cooperation would play an effective role in improving regional and global peace and security.

Berdymukhamedov for his part called for further expansion of his country’s defense cooperation with Iran.

He commended Iran’s progress in all sectors, particularly in defense technology and engineering services, and hoped the two countries would further work to improve relations.

The Iranian minister was in Turkmenistan at the head of a high-ranking delegation to discuss bilateral, regional and international issues with senior Turkmen political and military officials. Dehqan’s visit came upon an invitation by Turkmen Defense Minister Begench Gundogdiev.

This is the first visit by an Iranian defense minister to Turkmenistan since its independence from the Soviet Union in 1991.

Earlier on Monday, Dehqan met his Turkmen counterpart Gundogdyyev, where the two called for expansion of defense relations.

The Turkmen defense minister, for his part, stressed that the two countries enjoy centuries-old relations, calling for fostering mutual ties.

The two sides also highlighted the necessity of tackling violence, extremism and terrorism.