Monday, 08 March 2021 _This place is all about turning innovative ideas into practice. Toward Stars is the title of this exhibition which puts on display the latest technologies that are made in Iran. 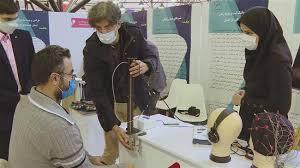 A whole range of high-tech products, from mapping drones to smart medical equipment are showcased here. In his visit to the expo, Commander of the Islamic Revolution Guards Corps, Major General Hossein Salami, hailed the Iranian tech companies for helping to keep the national industries afloat amid foreign pressures.

The event was inspired by remarks made by leader of Iran’s Islamic Revolution, Ayatollah Seyyed Ali Khamenei, in August last year, where he put emphasis on the need to focus on science-based production and avoid exporting raw material and bulk goods, such as saffron.

Given the fact that Iran produces 90-percent of the world’s saffron, this Iranian saffron producer has launched the so-called OSEC. It might be music to the ears, since it rhymes with OPEC, only, the letter S stands for saffron.

The Organization of Saffron Exporting Countries now is an established entity comprising 10 member states with the goal to organize the global market. While there’s a growing focus in Iran on commercializing indigenous products, this medical firm says the issue of marketing is still an alien word when it comes to Iranian-made products. But it says, that’s what it does.

Iran has recently been trying to make a shift from an oil-based economy to other sources of income. The major drive behind such a move is to shield the economy from the ups and downs of oil prices. In recent years, such a shift is more vital since Iran’s crude sales have slashed as a result of US’s unilateral sanctions against Iran.

This event comes as Iran is already rewiring its economy based on domestic production. This is significant given the fact that US sanctions against Iran have denied Iran the access to foreign trade. Tehran regards the restrictions as a blessing in disguise as it says self-sufficiency was the fruit of sanctions.