US security review urges beefed-up forces, surveillance around Capitol amid fears of violence

Tuesday, 09 March 2021_A US security review has called for heightened security in Washington, saying the Capitol’s policing and surveillance measures are "woefully inadequate" amid fears of violence by supporters of former president Donald Trump. 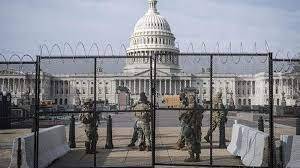 The security review, which was commissioned by House Speaker Nancy Pelosi in the wake of the January 6 attack on the Capitol Hill, called for hundreds of new police forces and a permanent barrier around the building, highlighting major shortfalls at the complex and the surrounding National Capital Region, including issues with police staffing and equipment.

The city removed some fencing around the Capitol last week despite warning from some officials who said there were still confusion and communication issues between top law enforcement officials who are charged with ensuring the security of the complex.

The report said, “As the [temporary] fencing comes down, we recommend it be replaced with a mobile fencing option that is easily erected and deconstructed and an integrated, retractable fencing system in the long term,” adding that “Such a solution could enable an open campus while giving security forces better options to protect the complex and its members should a threat develop.”

The review also found that the Capitol police were “understaffed, insufficiently equipped and inadequately trained” during the siege, suggesting the force add some 854 new staff to remedy “personnel shortfalls.” The new hires would fill gaps for regular officers, intelligence specialists, operational planners, supervisors and trainers, among other roles.

The report recommended the creation of a “quick reaction force” within the DC National Guard or a federal agency, which could be rapidly activated in the event of a crisis.

The Capitol security review was published Monday amid reports that some pro-Trump groups were planning to unseat the US government in a repeat of the January 6 attack launched by the Trump loyalists.