Wednesday, 10 March 2021_Security forces in Myanmar have attacked a compound where railway workers opposed to the recent military coup in the country have been on strike in the largest city of Yangon, amid an escalating crackdown on protesters. 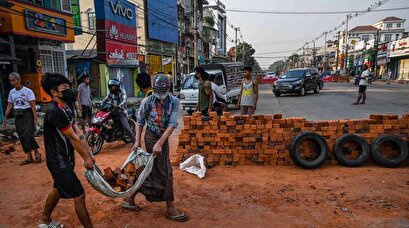 Footage posted on social media on Wednesday showed security forces near the railway staff compound, with people chanting slogans against the military regime.

“I think they are going to arrest us. Please help us,” said a person involved in the strike.

A commentator also claimed that police were trying to remove barricades and threatening to shoot people.

The railway workers’ walkout followed a call by trade unions for mass strikes to bring the country’s economy to a halt, as part of a civil disobedience movement that is gaining momentum across the country.

At least nine trade unions dealing with key sectors, including construction, agriculture, and manufacturing, have called on people to stop working in protest at the coup.

The impact of the general strike has been felt at every level of the national infrastructure, with shuttered hospitals, empty ministry offices, and banks being unable to operate.