US border patrol retains over 3,400 migrant children under inhumane conditions

Thursday, 11 March 202_What once counted in the hundreds of children who remained in the border patrol hands when they were cruelly separated from their parents by the Donald Trump regime, now they are counted by the thousands. The number tripled in just a few weeks. According to an internal CBP report, there are more than 3,400 unaccompanied migrant children are in cages. 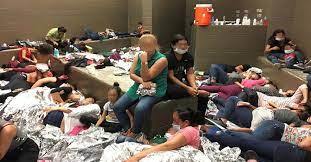 What is happening on the United States border was ignored for several days by President Biden's administration, even publicly refusing to accept that they are facing a humanitarian crisis. Still, according to witnesses, this is how they address the issue internally.

Aside from being in detention cages that is not designed for children, a report indicates that they are sleeping on benches as there are no beds.

According to government data, 9,000 migrant children crossed the border in February, but now thousands more are waiting on the Mexican side.