WASHINGTON, Sept 17, 2014 (AFP) - Iran cannot convince the world that its current ability to enrich uranium is acceptable, the top US negotiator said on Tuesday ahead of new nuclear talks with global powers. 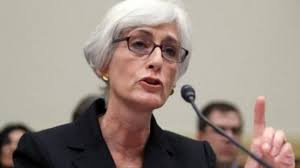 After months of intense negotiations the two sides have "identified potential answers to some key questions," Under Secretary of State Wendy Sherman said in a speech at an award-giving ceremony at Georgetown University.

But she warned "we remain far apart on other core issues, including the size and scope of Iran's uranium enrichment capacity."

As Iran and world powers prepare for new talks starting on the sidelines of the UN General Assembly this week in New York, Sherman said she expected the Islamic Republic "will try to convince the world that on this pivotal matter, the status quo ... should be acceptable."

"It is not," Sherman stressed, as she was given a top award for distinction in the conduct of diplomacy.

"If it were, we wouldn't be involved in this difficult and very painstaking negotiation."

The five permanent members of the UN Security Council -- Britain, China, France, Russia and the United States -- plus Germany (the P5+1) want Iran to scale down its nuclear activities to make any breakout move to manufacture a bomb extremely difficult.

In return Tehran, which denies wanting nuclear weapons and says a peaceful atomic program is its right, wants the lifting of tough UN and Western sanctions.

But Sherman stressed: "The world will agree to suspend and lift sanctions only if Iran takes convincing and verifiable steps to show that its nuclear program is and will remain entirely peaceful.

"We must be confident that any effort by Tehran to break out of its obligations will be so visible and time-consuming that the attempt would have no chance of success."

Sherman insisted the ideas that the US and its allies have put forward in the hopes of reaching a deal by a November 24 deadline were "fair, flexible and consistent with Iran's civilian nuclear needs and scientific knowhow."

The talks in New York start with EU foreign policy chief Catherine Ashton, the lead negotitator for the Western side, and Iranian Foreign Minister Zarif meeting on Wednesday, her spokeswoman said.

There will be additional "negotiating sessions" ahead of formal discussions between Iran and the P5+1 powers on Friday, Ashton's spokeswoman said.

Late last year, the two sides agreed an outline deal which offered an easing of some sanctions against Iran in exchange for its agreement to curb some nuclear activities.

The accord went into effect in January but while they missed a July 20 deadline despite intense negotiations, all parties agreed to extend the agreement to November 24 in the hope of getting a final settlement.
Share to
Tags
Iran ، uranium ، enrichment ، USA
Your Comment