Chief of Iranian Armed Forces: No Power can Defeat IRGC 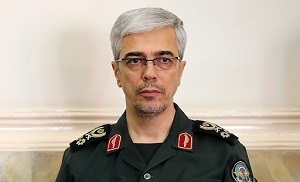 In his remarks during the birthday anniversary of Imam Hussein (PBUH) and the National Day of Guards Corps, Chief of Staff of Iranian Armed Forces, Major General Mohammad Bagheri said no power can defeat the IRGC.

He said his remarks in a letter, addressing the chief commander of the Islamic Revolutionary Guards Corps (IRGC) Major General Hossein Salami.

Bagheri noted in his letter that “After passing 43 years from the establishment of IRGC everyone is aware that the courageous IRGC forces have always stood against arrogant powers of the world while defending the achievements and values of the Islamic movement.”

“IRGC forces have always proved that no power can defeat them while relying on God and having support of the heroic nation of Iran, IRGC has the power of aggression and resistance; that is, they can attack the centers of threat from the enemy in any size, with any scale, and in any intensity.” he noted.