New US administration did nothing to make up for past mistakes: Rouhani

Tuesday, 16 March 2021_President Hassan Rouhani says the former “criminal” US administration did great injustice to the people of Iran with its terrorist acts, and that the new leadership in the White House has so far failed to take any practical measure to make up for the past wrongdoings. 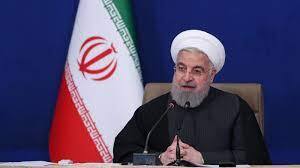 “The current US administration has repeatedly acknowledged the wrongdoings of the previous administration, but, two months on, we have not seen anything in practice (from Washington) to make up for these mistakes, and it has just been mere words,” Rouhani said in an address to the inauguration ceremony of national projects of the Energy Ministry on Tuesday.

He expressed hope that the new US administration would “return to the path of rationality and law and take steps in this regard.”

“Undoubtedly, if they return to compliance with their commitments, it will be not only in their own interests, but in the interests of the region, international organizations and commitments on the global scene,” Rouhani said.

Former US president Donald Trump abandoned the 2015 nuclear deal, officially known as the Joint Comprehensive Plan of Action (JCPOA) which was signed between Iran and major world powers, in 2018 and imposed the “harshest ever” sanctions on Iran, prompting Tehran to take remedial actions based on Article 36 of the JCPOA, including reduction of its nuclear obligations.

The new US administration, under President Joe Biden, has been so far faithful to Trump’s pressure campaign, and pressed Tehran to walk back its remedial steps while it is keeping the illegal sanctions in place as leverage — a path already taken and proven futile.

But Tehran says the US, as the first party that reneged on its commitments, should take the first steps towards the deal’s revival and unconditionally remove all the sanctions imposed under Trump in a verifiable manner.

Elsewhere in his address, Rouhani said the inauguration of the national energy projects under the difficult conditions of the enemy’s economic war and the outbreak of the coronavirus indicated that the Iranian people, especially the youth and engineers, have dynamic minds.

He added that given the continuation of the acts of terror by the United States against the Islamic Republic, many economic activities and the process of exports and imports of the country were faced with difficulties.

“We even have restrictions for purchasing the coronavirus vaccine,” the Iranian president stated.

He said the inauguration of national projects would encourage the Iranian people and deal a heavy blow to the enemies because they expected to harm the country’s economy but failed to achieve their goals.