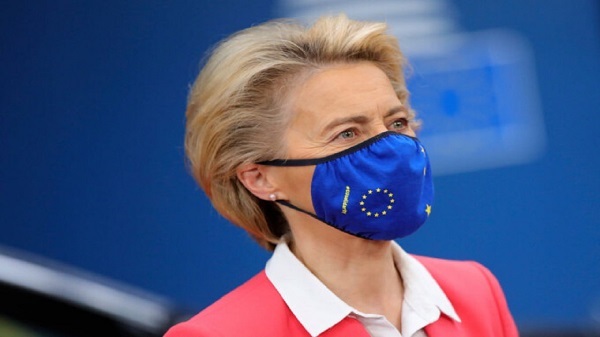 The EU may halt exports of Covid-19 vaccines to Britain to safeguard scarce doses for its own citizens unless the UK starts shipping shots to the bloc, the European commission president has said.

Ursula von der Leyen’s threat quickly produced a strong response from the UK, with the foreign secretary, Dominic Raab, accusing the EU of engaging in brinkmanship of the type exhibited by “less democratic countries”.

The commission president said that the EU wanted “to see reciprocity and proportionality in exports and we are ready to use whatever tool we need to deliver on that” . She added: “This is about making sure that Europe gets its fair share.”

Von der Leyen said the EU could trigger article 122 of the EU Treaty, an emergency clause allowing it to take exceptional measures, such as seizing production of vaccines and suspending intellectual property rights, “if severe difficulties arise in the supply of certain products” to member states.

“All options are on the table,” she said. “We are in the crisis of the century. We have to make sure Europeans are vaccinated as soon as possible. Human lives, civil liberties and our economy are dependent on the speed of vaccination moving forward”.

Von der Leyen said the EU had received more than 300 requests for overseas vaccine shipments over the past six weeks and refused just one, and the bloc had exported 41m doses to 33 countries.

“This shows that Europe is trying to make international cooperation work,” she said. “But open roads run in both directions … It is hard to explain to our citizens why vaccines produced in the EU are going to other countries that are also producing vaccines, but hardly anything is coming back.”

Von der Leyen said the bloc had exported 10m doses to the UK in the past six weeks, making it “country number one as far as exports from the EU is concerned”.