Thursday, 18 March 2021_AS the Syrian conflict passes its ten year anniversary, a look back at the sheer scale of destruction, the immense human suffering focus soon turns to the five million people displaced and scattered. 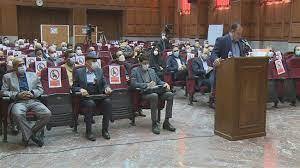 A huge cost born by a lost generation, but these 5 million people makeup but a fraction of the global crisis. according to the UNHCR, more than 80 million people are currently displaced. a figure that surpasses all historical records. 7 times the number displaced in the second world war.

A truly global crisis, largely fuelled by western backed wars in Syria Iraq Libya and Yemen. Ironic then that the same leaders who support sanctions and foreign backed fighters, come together to discuss ways to push back people fleeing these conflicts.

EU incentives to curb refugees have had varying success. Turkey received huge financial incentives to halt Syrian Refugees at the border. they’ve also been given the political capital to invade and occupy northern Syria. thousands of foreign fighters have been stationed there, deployed at Ankara’s discretion. Similar incentives were offered to officials In Libya.

There refugees are arrested and detained in some of the harshest conditions. some reports suggest refugees being sold into slavery. It remains unclear whether these new proposals will have any more success.

Anti war campaigners have often highlighted the inevitable flow of refugees as a consequence of western backed conflicts, calling on their governments to halt the flow of weapons into these regions, however these have largely been ignored. For now it seems corporate profits and anti immigrant political sentiment will go hand in hand as more and more refugees find themselves trapped on the periphery - unable to return home, unable to reach safety.