Friday, 19 March 2021_The post-Brexit war between the UK and the EU over Covid-19 vaccines is taking its toll. Emotionally charged accusations and clarifications have been exchanged between Britain and Brussels over the past few weeks, as the EU ushers in a third wave of the virus. The bloc blames its sluggish vaccine rollout on lack of supply, casting doubt on whether export contracts will be honored. 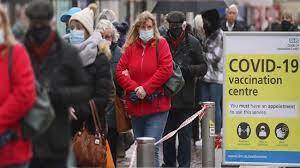 The EU says vaccine exports to countries with higher vaccination rates than the bloc could be halted. The UK definitely falls into that category having given nearly half of all adults their first jab. But to make good on its promise to inoculate everyone by July, the UK needs those jabs to keep coming. A leaked NHS letter has suggested the UK might see a significant reduction in vaccine supply from the end of March, so the EU announcement adds insult to injury.

This is just the latest in a series of post Brexit spats between the UK and EU. The EU’s vaccine rollout has been sluggish, and nerves are frayed in Brussels. Half of Italy is already in lockdown again, and the same is expected in France, Germany and Poland as cases rise exponentially.

The suspension of AstraZeneca, which had taken over taken Pfizer Biontech as the most administered vaccines in European, threatens to make things even worse. Months ago, when vaccines started being approved across the western world, the European Union was quick to secure a large chunk of supplies. But now other vaccines are flooding the market, and the EU risks being left behind.

Share to
Related News
Boris Johnson hits back at EU plans for vaccine 'blockade'
US Accuses Russia of Disinformation and Eroding Trust on Vaccines
Minister: UK must avoid importing vaccine-resistant variants at all costs
Tags
exports ، UK ، europe
Your Comment