Sunday, 21 March 2021_The first summit between China and the United States since the election of Joe Biden produced an unexpected and extraordinary diplomatic blow up. 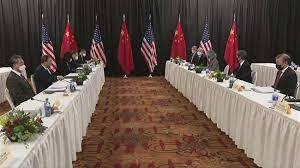 During opening remarks top US diplomats tried to present China as a global threat, airing a litany of complaints about the way China’s government and political culture differs from the West.

That breach of diplomatic norms led to an hour of public arguing which saw China’s top diplomat, Yang Jiechi, point out that the US was “massacring the people of other countries”, and “toppling regimes” “through the use of force”. Yang called the US the “champion” of cyberattacks, noted that Blacks in the US are “slaughtered’, and asked the US to “stop advancing its own democracy in the rest of the world”, a democracy which many Americans no longer have confidence in, said Yang.

The summit may come to be viewed as the beginning of a new geopolitical era defined by Chinese confidence. Just prior to the summit Biden placed sanctions on two dozen Chinese officials, which may have been designed to end any chances for cooperation even before the meeting began.

The Obama administration's "pivot to Asia” policy shifted the Pentagon's planning from the Muslim world to conflict with China. Biden has continued with an openly-antagonistic approach that rejects Beijing's call for cooperation amid the multiple global crises.

The talks concluded without the issuance of a final joint statement. Experts in both nations say few should expect a significant improvement in bilateral relations between the two superpowers.