Sunday, 21 March 2021 _Thousands of protesters take to the streets in Istanbul after Turkey withdrew from the world's first binding treaty to prevent and combat violence against women, sparking both domestic and international outrage. 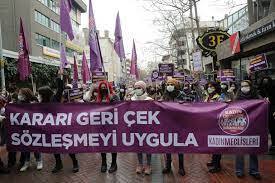 Thousands protested in Turkey on Saturday calling for President Recep Tayyip Erdogan to reverse his decision to withdraw from the world's first binding treaty to prevent and combat violence against women.

The government sparked domestic and international outrage after announcing the decision before dawn on Saturday, the latest victory for conservatives in Erdogan's nationalist party and their allies who argued the treaty damaged family unity.

The 2011 Istanbul Convention, signed by 45 countries and the European Union, requires governments to adopt legislation prosecuting domestic violence and similar abuse as well as marital rape and female genital mutilation.

"Reverse your decision, apply the treaty!" chanted thousands of people during a protest in the Kadikoy neighbourhood on the Asian side of Istanbul on Saturday.

The protesters held up portraits of women murdered in Turkey, one reading: "It is women who will win this war".

Protester Banu said she was "fed up with the patriarchal state".

"I'm fed with not feeling safe. Enough!" she told AFP.

Other smaller protests were held in the capital Ankara and the southwestern city of Izmir, according to media reports.

Europe's top rights body, the Council of Europe, denounced Turkey's withdrawal from a treaty it sponsored.

"This move is a huge setback to these efforts and all the more deplorable because it compromises the protection of women in Turkey, across Europe and beyond," Council of Europe Secretary General Marija Pejcinovic Buric said.

The treaty "is widely regarded as the gold standard in international efforts to protect women and girls from the violence that they face every day in our societies," she added.

The European Parliament's Turkey rapporteur Nacho Sanchez Amor tweeted that "this is the current Turkish government's real face: complete disregard to the rule of law, and full backsliding on human rights."