Thousands stage protest against Netanyahu ahead of election

Sunday, 21 March 2021 _Thousands of people demonstrated outside the home of Israel's Prime Minister Benjamin Netanyahu in Jerusalem al-Quds on Saturday (March 20), calling for an end to his leadership just three days before the country's fourth election in two years. 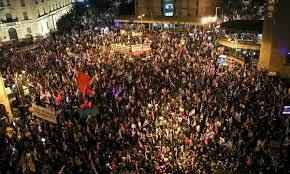 Thousands of Israelis have demonstrated outside the official residence of prime minister Benjamin Netanyahu, calling for his ouster ahead of this week’s parliamentary elections.

The weekly protests against Netanyahu have taken place for nine months. But they have lost strength in recent months in part due to cold winter weather and after early elections were declared in December. Saturday’s night’s rally in central Jerusalem was the largest in months.

The grassroots protest movement believes Netanyahu cannot serve as prime minister while he is on trial for multiple corruption charges. Many also object to his handling of the coronavirus crisis.