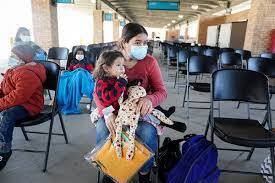 US Representative Henry Cuellar (D-Texas) captured the images during a recent trip to inspect the squalid facility.

The Biden administration is under fire over the growing humanitarian crisis at the border, where an influx of refugee fleeing violence and economic hardship in Central and South America.

The White House is, in particual, wrestling with reports about conditions in overcrowded detention centers for unaccompanied immigrant children.

More than 10-thousand kids, including many of those forcibly separated from their parents, are now in the care of the Department of Health and Human Services as US officials are struggling to process them.

5,200 others are also stranded in Border Patrol facilities not designed for long-term custody, US media reports say.

President Biden vowed to unwind many of the immigration policies of former president Donald Trump when he assumed office on Jan. 20, saying he would erase what he has called "a moral and national shame" inherited from Trump.

Biden ordered the reunification of migrant children with their families, halted construction of the border wall and called for reviews of legal immigration programs terminated by Trump.

The rolling back of Trump’s immigration policies stoked illegal immigration, with large numbers of asylum seeking unaccompanied children massing on the US border from Mexico.

The Biden administration has been sharply criticized by both fellow Democrats and Republicans for the handling of the refugee crisis at the southern border.

Republicans ripped the president for undoing Trump’s hardline policies, saying his administration has encouraged illegal immigration into the US.

Biden stands accused of failing to respond effectively -- and of lacking transparency with the media, with his fellow Democrats criticizing his administration for using notorious Trump-era detainment facilities in Texas to keep migrant children.