Sunday, 28 March 2021_The latest use of lethal force by Myanmar’s junta against unarmed civilians has drawn widespread backlash, with military chiefs of a dozen countries joining together to condemn the bloodbath on Saturday, when more than 100 people lost their lives in the deadliest day of protests since the military coup early last month. 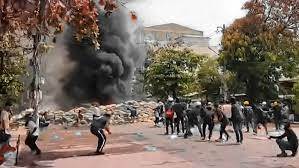 The defense ministers of 12 countries including Britain, Japan, Australia and the United States on Sunday censured Myanmar's deadly crackdown on anti-coup demonstrators, a day after security forces killed 114 people across the country.

“A professional military follows international standards for conduct and is responsible for protecting — not harming — the people it serves,” the ministers said in a joint statement.

“We urge the Myanmar Armed Forces to cease violence and work to restore respect and credibility with the people of Myanmar that it has lost through its actions.”

The other countries that backed the statement were Australia, Canada, Germany, Greece, Italy, Denmark, the Netherlands, and New Zealand.

The Saturday bloodbath, which was described by a United Nations investigator as “mass murder,” took place on the same day that Myanmar’s military was celebrating its annual Armed Forces Day, with the security personnel staging a parade of troops and military vehicles and junta leader General Min Aung Hlaing delivering a speech.