Iran's Zarif due in Tajikistan for Heart of Asia conference

Iranian Foreign Minister Mohammad Javad Zarif is due to travel to Tajikistan for a ministerial conference of the countries comprising the Heart of Asia platform that focuses on Afghanistan. 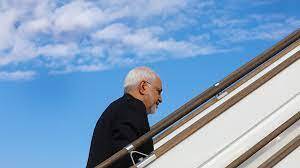 Foreign Ministry spokesman Saeed Khatibzadeh announced the pending trip in a tweet on Sunday. He said the top diplomat would travel to Tajikistan's capital Dushanbe on Tuesday for a two-day stay that would involve an attendance at the gathering.

Apart from Afghanistan, Tajikistan, and Iran, the initiative features 12 other main members, including China, Russia, and Turkey.

It was launched in Istanbul in 2011 as a platform for promoting regional security, economic, and political cooperation that is centered on Afghanistan. The mechanism specifies dialogue and confidence-building measures as the main vehicles that it uses to implement the goals.

Since its establishment, the initiative has been followed by eight ministerial meetings.

Zarif attended the last previous conference that was held in the Turkish economic hub.

The foreign minister later joined a gathering of the Conference on Interaction and Confidence-Building Measures in Asia (CICA), a supporting organization of the Heart of Asia process.

According to Khatibzadeh, Zarif’s visit would also involve talks with Tajik officials. “A common civilizational, historical, and cultural heritage has forged an indissoluble connection between the two Muslim and Persian-speaking nations of Iran and Tajikistan,” he added.