Saturday, 03 April 2021_Protesters have taken to the streets in Bahrain to show solidarity with political prisoners and call for their immediate release as the ruling Al Khalifah regime presses ahead with its cruel clampdown on human rights advocates and opposition figures in the tiny Persian Gulf kingdom. 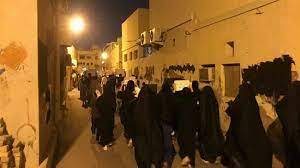 On Friday evening, protesters staged rallies under the motto “Friday of Prisoners’ Rage” to denounce Bahraini authorities’ mistreatment of jailed activists, and their miserable conditions at detention centers especially in light of the coronavirus pandemic.

The demonstrators carried Bahrain’s national flags and chanted anti-regime slogans in the villages of al-Malkiya, al-Maqsha, Southern Sehla, Diraz, Bu Quwah and al-Dair as they called for the immediate release of the inmates.

The Protesters said the coronavirus outbreak has exacerbated the situation of the prisoners – some of whom have lost their lives to the highly contagious respiratory disease.

Bahrainis also held similar demonstrations in the villages of Abu Saiba, Shakhurah, al-Markh, Nuwaidrat, Shahrakan and Tubli as well as Salmabad and Sanad towns, where they held up the pictures of their imprisoned loved ones as well as those of prominent opposition figures, including Zakia al-Barbouri, who was charged to five years in prison on February 6, 2019, and had her citizenship revoked in a politically-motivated case.

In a statement carried by Arabic-language Bahrain Mirror news website, the senior cleric called on the ruling Al Khalifa regime to choose between the deaths of the dissident inmates and their release.

“One of the worst things that the government of Bahrain does is to keep prisoners as leverage for political bargaining, especially now that the coronavirus [pandemic] is attacking [Bahrain's] prisons with full force,” the senior cleric added.

“He's serving a life sentence in prison for peacefully defending the rights of others,” Mary Lawlor, UN special rapporteur on the situation of human rights defenders, said in a video message posted to Twitter on Friday.

She added, “He's been given an unfair trial and details of his torture have been corroborated by an independent commission of inquiry.”