Monday, 05 April 2021_Malaysia’s Court of Appeal has begun hearing a bid by former Prime Minister Najib Razak to overturn his conviction on corruption charges linked to the massive looting of a state investment fund. 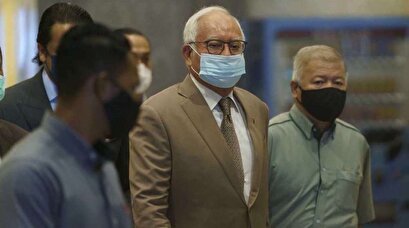 Najib, who was defeated by Mahathir Mohamad in 2018 historic elections, was found guilty of abuse of power, criminal breach of trust and money laundering for illegally receiving about $10 million from SRC International, a former 1Malaysia Development Berhad (1MDB) unit.

As a result, Najib was sentenced to 12 years in jail and a $50 million fine by a Malaysian High Court.

The former premier also faces several trials over allegations that $4.5 billion was stolen from 1MDB. He has denied all wrongdoing and his sentence was stayed pending the appeal.

Prosecutors claim that more than $1 billion in 1MDB funds ended up in Najib’s personal accounts, for which he is facing 42 criminal charges.

The 1MDB scandal has implicated other high-level officials and major financial institutions, and has sparked investigations in the US and at least five other countries.

Meanwhile, defense lawyers argue that the trial judge had ignored evidence showing that Najib was misled by Malaysian financier Jho Low and other 1MDB officials into believing that the funds in his account were a donation from the Saudi royal family.