Wednesday, 07 April 2021_Iran says one of its merchant vessels has been targeted by an explosion of unknown origin in the strategic Red Sea, in the second such incident in less than a month. 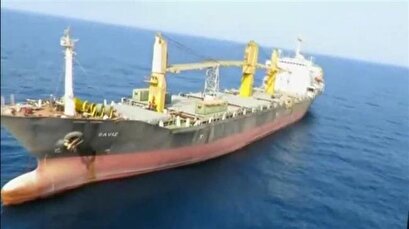 Foreign Ministry spokesman Saeed Khatizadeh told reporters that the Saviz ship was struck by the blast at around 6 a.m. local time (0300 GMT) on Tuesday, April 5, near the coast of Djibouti, and sustained minor damage.

“Fortunately, no fatalities were caused by the incident, and technical evaluations on how the incident occurred and its origins are underway,” he added.

The Iranian official said Tehran will take all the necessary measures regarding the case through international bodies.

Rejecting media claims, Khatibzadeh said the Saviz is a non-military vessel, whose specifications and mission have been formally registered with the International Maritime Organization (IMO).

He said the ship acts as Iran’s logistic station in the Red Sea and the Gulf of Aden, protects naval routes and provides security for merchant vessels and tankers against pirates.

A New York Times story published on Wednesday quoted an anonymous US official telling the newspaper that the Tel Aviv regime notified the United States that Israeli forces had attacked an Iranian ship in the Red Sea.

The unnamed US official said Israel called the strike a retaliation, and that the ship had been hit below the water line.

In a similar incident last month, an Iranian cargo ship was damaged after it was targeted by a terrorist attack en route to Europe in the Mediterranean Sea.

Tehran said back then that such acts of terror are a clear example of naval piracy and run counter to international law on the safety of commercial vessels.

On February 25, an explosion struck Israeli-owned and the Bahamas-flagged ship, the MV Helios Ray, in the Sea of Oman near the strategic mouth of the Persian Gulf.