Saturday, 10 April 2021_A Joint commission session between Iran and the remaining signatories of the nuclear deal, known as the JCPOA comes to an end in Vienna. 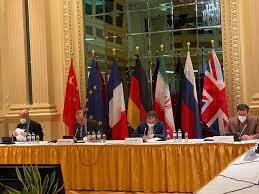 Iran’s lead delegate, Deputy Foreign Minister Abbas Araqchi says Iran’s demand is clear: it will only come back to full compliance with the agreement after the US lifts sanctions imposed, reimposed or relabeled following the US withdrawal from the JCPOA. And Iran will also want to verify the sanctions lifting.

China’s representative said the sides are narrowing down their differences. He said Beijing believes all the nuclear-related unilateral US sanctions are illegal and should be lifted immediately to safeguard the JCPOA. The demand to lift all sanctions at once is a legitimate one, he said.

Araqchi said he believes it is possible to get the job done sooner rather than later but it depends on how willing and serious the other side is.

After three days of intensive discussions within 2 working groups, delegates agreed the talks are moving in the right direction. The Joint Commission will meet again on Wednesday amid hopes to maintain momentum.