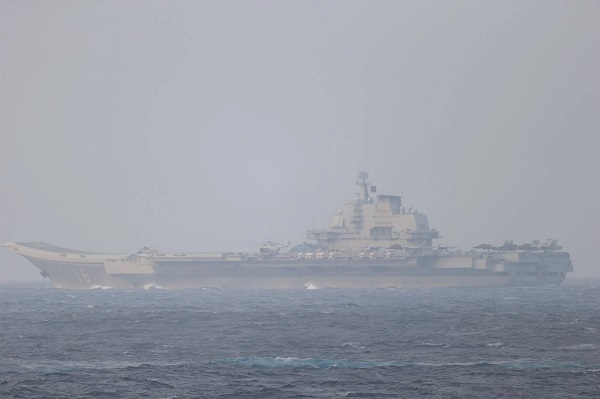 The United States military has engaged in a form of “cognitive warfare” following the latest encounter between its warships and the Chinese navy.

Both countries have deployed aircraft carrier strike groups to the East and South China seas, led by the USS Theodore Roosevelt and the Liaoning, respectively.

On Sunday, the US released a photo that showed one of its guided-missile destroyers, the USS Mustin, shadowing the Liaoning group - a move that analysts said was designed to send a clear message to the Chinese.

The photo taken on Monday somewhere in the East China Sea showed the ship’s captain, Commander Robert J Briggs, and his deputy Commander Richard D Slye watching the Liaoning, which was just a few thousand metres away.

“In the photo, Commander Briggs looks very relaxed with his feet up watching the Liaoning ship just a few thousand yards away, while his deputy is also sitting beside him, showing they take their PLA counterparts lightly,” said Lu Li-shih, a former instructor at Taiwan’s Naval Academy in Kaohsiung.

“This staged photograph is definitely ‘cognitive warfare’ to show the US doesn’t regard the PLA as an immediate threat.”

Zhou Chenming, a researcher with the Yuan Wang think tank, a Beijing-based military science and technology institute, said the photo indicated that the US warship kept a “very safe distance” while shadowing the Liaoning.

“Both sides understand that there is a big gap between the US and Chinese aircraft carrier strike groups,” Zhou said.

The Beijing-based South China Sea Strategic Situation Probing Initiative said the US military had increased the deployment of aircraft and warships to the East and South China seas.