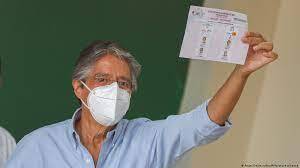 Lasso, with some 52.5 percent of the votes, had a 5.5 percent lead over Arauz in the second round of voting held on Sunday.

Arauz, who topped the first round of the voting, said he had expected to win the presidency.

Correa is living in Belgium after receiving an eight-year prison sentence on corruption charges in his home country.

Lasso, a former banker, is a proponent of tax cuts and austerity measures.

He believes new tax cuts will boost the economy and backs measures to reduce public debt. He has formerly run for the presidency twice.

Lasso will succeed current President Lenin Moreno, who congratulated the president-elect in a tweet and wished him success. The outgoing president is deeply unpopular.

Lasso's rise to power comes as the Latin American country grapples with the health and economic consequences of the coronavirus pandemic, which has killed more than 17,000 people in Ecuador and strained the country's healthcare system.