Monday, 12 April 2021_The United States has no left. That was decimated a long time ago. Instead what you have are self-styled "progressives" in Congress like Senator Bernie Sanders, Alexandria Ocasio-Cortez, the Squad and other newcomers. 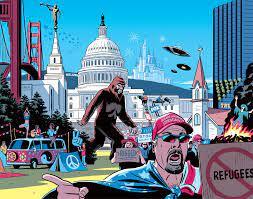 The same people who said they would "push Biden left" have done nothing but insulate Biden and his regime from criticism. So far they've managed to dismiss the #ForceTheVote movement; refusing the leverage Pelosi's speakership in exchange for a floor vote on Medicare For All. They voted for Biden's $1.9trillion COVID relief bill, even after the $15 minimum wage was gutted.

They have justified Biden's reopening of Trump's camps at the border and the appalling treatment of refugees and migrants. Progressives in Congress, as usual stay silent on Palestine, Biden's bombing of Syria, his sanctions on Iran, Venezuela and provide him with cover.

Given all this, what does the word "progressive" even mean anymore, when all progressives do is capitulate and cater to the DC political establishment? Richard Medhurst sits down with Ryan Knight to discuss the "Boutique Left" and the attacks made on anyone questioning America's most popular politicians for not doing their jobs.