Tuesday, 13 April 2021_Iran’s permanent representative to Vienna-based international organizations has stressed that despite an act of sabotage, enrichment at the safeguarded nuclear facility in Natanz has not stopped. 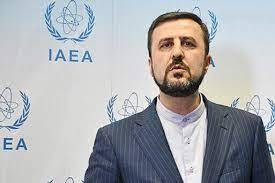 In a televised interview on Monday, Kazem Gharibabadi, who is also Iran’s ambassador to the International Atomic Energy Agency (IAEA), said that the damaged IR-1 centrifuges were replaced in no time with others capable of 50 percent more enrichment capacity.

He added that the latest generation of Iranian-manufactured centrifuges would also be set up in the nuclear facility in the near future.

His remarks came just a day after a reckless act of sabotage targeted the electricity distribution network of Shahid Mostafa Ahmadi Roshan nuclear facility in Natanz, which is a uranium enrichment center located in the city of the same name in Iran’s central province of Isfahan.

The attack caused a blackout and the disruption of the operations of this sensitive nuclear facility which has been under the IAEA’s safeguards and extensive monitoring.

“The full responsibility for this act of sabotage lies with the Zionist regime of Israel and its supporters,” Gharibabadi further said, adding that the attack was aimed at weakening the morale and efforts of Iran’s nuclear scientists.

“Experience has shown that Iran has emerged stronger than before after such desperate acts of sabotage,” he stressed.

He said apart from replacing the damaged centrifuges with more powerful ones and a plan to add new machines to the facility, a number of other technical measures are also planned to be taken, in response to the Sunday attack, that would be reported to the IAEA this week.

Elsewhere in his remarks, Gharibabadi said that Iran had sent a letter to Rafael Grossi, the IAEA’s chief, asking him to condemn the act of sabotage against the Natanz Fuel Enrichment Plant.

“Considering the possible indiscriminate human and environmental consequences of this international crime, those who planned, ordered, participated, and carried out this cowardly act committed a grave war crime,” Zarif said.

The act of sabotage came a day after Iran began feeding gas to cascades of new, advanced centrifuges and unveiled 133 achievements to mark its National Nuclear Technology Day and show the peaceful nature of its nuclear program.