Tuesday, 13 April 2021_Restaurateurs, gym owners and business people from various other industries have continued to stage protests across Italy demanding the government to immediately lift the ban on their activities. 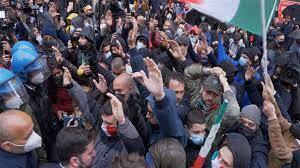 A protest dubbed "Io Apro" - I open - was staged in central Rome. Hundreds of angry business people tried to head towards the parliament building but were met by police in riot gear and had to detour to nearby San Silvestro square. Here they shouted "Freedom" and "Let us get back to work" with some hurling smoke flares and other objects.

Under Italy's current red and orange zone restrictions restaurants remain closed at night and are open only for takeaway during the day.

Whereas swimming pools and fitness centers are closed all day.

The protest turned nasty when protesters -- infiltrated by ultra-right activists and professional organizers of social unrest -- threw firecrackers and objects at police. Officers charged the protesters after they tried to breach a police cordon.

Meanwhile restrictions were eased across most of Italy after six regions were downgraded from red to orange on Monday.

However Prime Minister Mario Draghi has said Italy will have no moderate-risk yellow zones this month in an attempt to keep the spread of the virus down while his government tries to step up a much-delayed vaccination campaign.