People angry over delay in expelling French envoy to Pakistan

Wednesday, 14 April 2021_Pakistan has been the scene of violent protests after the government apparently backed out of its commitment to expel the French ambassador. The repeated publications of blasphemous cartoons of the Prophet Mohammad in France has been the main cause of anger in Pakistan. 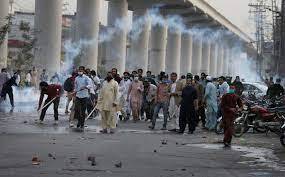 At least three people, including a police officer, have been killed as protests against the arrest of a religious party leader continued in several cities of Pakistan.

The policeman was killed in overnight clashes with the supporters of Saad Rizvi, the head of the Tehreek-e-Labaik Pakistan who was arrested on Monday in Lahore, a senior police officer Ghulam Mohammad Dogar said.

Ten policemen were also wounded in these clashes in the town of Shahadra near Lahore.

Two demonstrators were reportedly killed in the eastern Punjab province. The violence began Monday after police arrested Rizvi for threatening protests if the government did not expel France’s ambassador over depictions of Islam’s Prophet Muhammad.

According to Dogar, the arrest was aimed at maintaining law and order. But Rizvi’s detention quickly sparked violent protests by religious groups in cities around the country. The protesters blocked highways and roads in several cities.

The deadly clashes come two days after Rizvi in a statement asked the government of Prime Minister Imran Khan to honor what he said was a commitment it made in February to his party to expel the French envoy before April 20 over the publication in France of depictions of Islam’s Prophet.

However, the government has said it only committed to discussing the matter in Parliament.