Wednesday, 14 April 2021_Leader of the Islamic Revolution Ayatollah Seyyed Ali Khamenei has warned against protracted talks aimed at reviving the 2015 nuclear deal, reiterating that Iran will only return to its commitments under the accord once it has verified that all US sanctions have been removed. 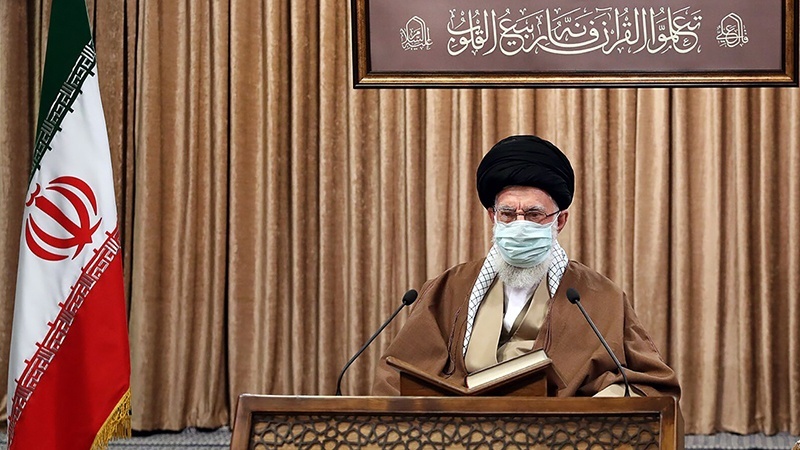 Ayatollah Khamenei said on Wednesday that he has directed Iranian diplomats to proceed with the negotiations, but cautioned them the talks should not drag on.

“The talks shouldn’t become talks of attrition,” the Leader said. “They shouldn’t be in a way that parties drag on and prolong the talks. This is harmful to the country.”

“The fact that the Americans talk about engaging in direct and indirect negotiations [with Iran] is not because they want to negotiate and accept the truth, rather it is to impose their wrongful argument” on Iran, the Leader noted.

An Iranian delegation headed by Deputy Foreign Minister Abbas Araqchi is in Vienna, Austria, for another round of talks with the P4+1 countries – the UK, France, Russia, China and Germany-- aimed at finding a way for the United States to rejoin the nuclear agreement, officially called the Joint Comprehensive Plan of Action (JCPOA).

The United States, under former president Donald Trump, unilaterally withdrew participation in the agreement and reimposed sanctions against Iran, which the accord had lifted.

The Trump administration subsequently launched what it touted as a campaign of “maximum pressure” against Iran, hoping to force the Islamic Republic to accept large-scale limits on its nuclear program and missile work, among other things.

The administration of US President Joe Biden has verbally renounced that policy and admitted to its failure, while expressing a willingness to return to the Iran deal. However, it has so far stopped short of taking any concrete steps to that end and retained the sanctions on the Islamic Republic.

Ayatollah Khamenei stressed that the Islamic Republic’s position on the issue, that the United States -- as the party that has repeatedly reneged on its obligations in the past--  must first remove the sanctions, is privately shared by some Europeans involved in the talks.

“However, when it comes to decision-making, they bow to the Americans and do not act independently,” the Leader said.

“Most of the proposals by the Americans are arrogant and contemptuous. They are not worth looking at,” Ayatollah Khamenei noted.

Following the US withdrawal from the JCPOA in May 2018, Iran waited patiently for an entire year for the European parties to the deal to shield Iranian business interests in the face of US sanctions.

However, as the Europeans failed to hold up their contractual obligations to Iran under the threat of US reprisal, Tehran began a series of countermeasures by scaling back its own commitments under Articles 26 and 36 of the JCPOA covering Tehran’s legal rights.

The Vienna talks already have been thrown into disarray by an attack on Iran’s Natanz nuclear enrichment site, which Tehran says was carried out by the Israeli regime.

Tehran has announced its intention to significantly increase its nuclear steps in response to the act of nuclear sabotage, including enriching uranium at 60-percent purity level-- higher than it ever has before.

Foreign Ministry spokesman Saeed Khatibzadeh said “the Islamic Republic’s retaliatory measures within the framework of the JCPOA will significantly increase due to the recent nuclear sabotage.”

The attack caused a blackout and the disruption of some operations at Natanz nuclear facility which has been under the safeguards and extensive monitoring of the International Atomic Energy Agency (IAEA).

Speaking to his cabinet on Wednesday, Iranian President Hassan Rouhani said the first-generation IR-1 centrifuges that were damaged in Sunday’s attack would be replaced by advanced IR-6 devices that enrich uranium much faster.