Peres calls for overthrow of Netanyahu

Peres calls for overthrow of Netanyahu 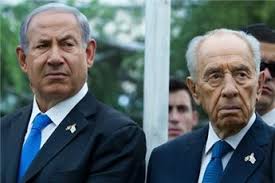 Under the scenario, the coalition could continue its work only if Haredi (the ultra-Orthodox) parties join it. However, elections would be the most likely scenario given the slim chance of this move by Haredi parties.

"The Netanyahu government has reached the end of its path,” said Peres, adding that "It did not meet my expectations and did not advance the diplomatic process.”

Recently, Netanyahu has been under fire for launching the costly military operation on the Gaza Strip, which ended in the regime’s failure in achieving its goals.

Opinion polls showed Netanyahu’s popularity plummeting with a rapid pace. In a survey on Channel 10 TV, respondents gave Netanyahu a grade of 55 percent, down from a 69 percent score at the beginning of the month.

"After 50 days of warfare... we could have expected much more than an announcement of a ceasefire,” analyst Shimon Shiffer wrote in Yedioth Ahronoth (Ynet).