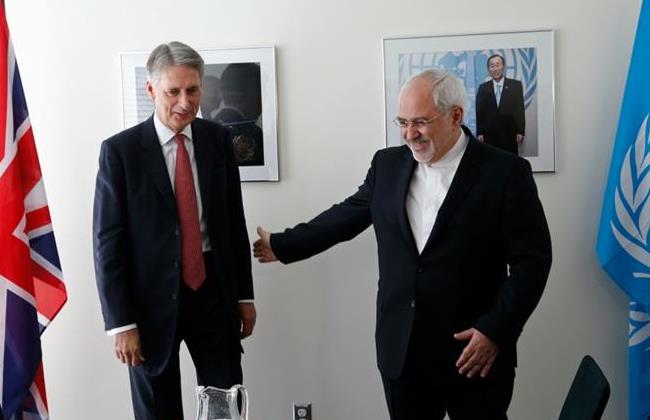 Iranian Foreign Minister Mohammad Javad Zarif and British Foreign Secretary Philip Hammond met on Monday on the sidelines of the 69th session of the UN General Assembly in New York.

"We discussed bilateral relations and reaffirmed our commitment to reopen our Embassies once the necessary practical arrangements can be made,” Hammond said after the meeting.

Iran and the UK officially resumed direct diplomatic ties in February after the two countries severed diplomatic relations in 2011.

The two countries have appointed non-resident chargés d’affaires as a first step toward reopening their respective embassies.

On November 27, 2011, Iranian MPs voted by a large majority to downgrade diplomatic ties with the UK, in response to Britain's decision to impose new anti-Iran bans.

Following the decision by Majlis, hundreds of Iranian students staged a protest outside the British Embassy in Tehran, pulling down the UK flag and demanding the expulsion of the British ambassador.

On November 30 of the same year, London cut off its ties with Tehran, withdrew its diplomatic staff from Iran and the Iranian Embassy in London was closed.

We stressed that it would remain in all our interests to reach an agreement that addresses international security concerns and which begins to rebuild global confidence in Iran, the British foreign secretary said.

Hammond said that "UK remains committed to securing a deal” with Iran over its nuclear energy program, "but Iran needs to show more realism and flexibility in order for negotiations to succeed.”

This comes as Iran and the P5+1 group – Russia, China, the United States, Britain, France and Germany – are holding a new round of talks on Iran’s nuclear energy program in New York.

The negotiations are meant to reach a final agreement aimed at resolving the standoff over Tehran’s civilian nuclear work.