Tehran, YJC. The Iranian and British heads of government met on Wednesday, making the first such meeting in nearly four decades. 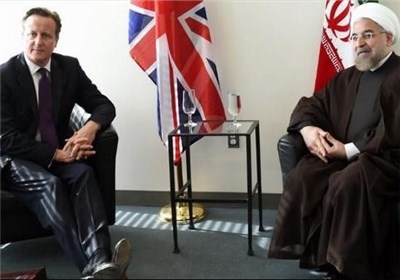 "Iran seeks constructive cooperation with the world which is based on common respect and interests. As for the UK, we are also interested in launching good relations and expanding cooperation,” stated Rouhani.

He also stressed the need for two countries to facilitate mutual tourism and hoped that the two countries engage in more cultural interaction.

Pointing to the Iran-5+1 talks on Iran’s nuclear program he said "In Iran, we are intent upon reaching a comprehensive outcome in the negotiations and we seek peaceful activities within the NPT.”

The IAEA reports prove that Iran has made no divergence, he asserted.

He noted "The sanctions approach yielded no result; but was rather deteriorating for all sides. The end of sanctions and onset of agreements can help extensive, stable relations among the sides.”

Cameron for his part pointed to recent years disagreements between Iran and the UK and maintained that the opportunity is very important to reconstruct Iran-West relations.

There are great opportunities in economy and in scientific topics for cooperation and talks between the two countries, he said.

The UK prime minister noted that like any other country, Iran has the right to make peaceful use of nuclear energy, praising Iran for its attempts to reach a comprehensive agreement on its nuclear program.

He also expressed gratitude toward Iran for helping settle the new Iraqi government.