SYDNEY, Sept 27, 2014 (AFP) - Australia's Immigration Minister Scott Morrison on Saturday defended the government's plan to transfer refugees to Cambodia, saying the programme would start small but be a long-term arrangement. 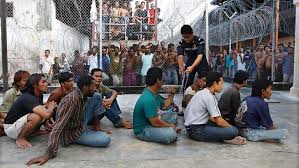 Under Canberra's hardline immigration policy, asylum-seekers who arrive on boats are denied resettlement in Australia and sent to Papua New Guinea and the Pacific state of Nauru, even if they are genuine refugees.

On Friday, Morrison signed a deal in Phnom Penh which would allow those in Nauru who have been given refugee status to move to Cambodia, one of the poorest nations in Southeast Asia.

"The next step is now to put the arrangements on the ground, and there's still a lot of implementation work to be done in engaging with other settlement partners, those who provide those services directly here in Cambodia," Morrison told the Australian Broadcasting Corporation.

Morrison said it would be up to Cambodia to determine when it would accept the refugees and how many would come but that the plan could begin later this year.

He downplayed reports that Cambodia would only take a handful of refugees initially, saying Phnom Penh had made "a very strong commitment" in signing up to the arrangement.

"What Cambodia is saying, and we agree with them, is that you have to start off small, make sure the programme is working, and then build it up over time," Morrison said.

"They are committed to this programme. This is a long-term arrangement and it's one we're both very committed to."

Morrison said the idea was for potential refugee resettlement anywhere in Cambodia, with Australia providing support for housing, education and health as well as language training.

But the United Nations has criticised the deal, under which Australia will also give Cambodia Aus$40 million (US$35 million) in additional aid over four years, as a "worrying departure from international norms".

"It's crucial that countries do not shift their refugee responsibilities elsewhere," UN High Commissioner for Refugees Antَnio Guterres said Friday, urging Australia to "reconsider its approach".

Australia's move to transfer refugees to Cambodia is its latest immigration policy to come under fire, having already earned criticism for sending asylum-seekers to PNG and Nauru and turning back Australia-bound boats.

The government maintains the policies are designed to crack down on the people-smuggling trade following scores of lives lost making the journey to Australia in recent years.

Morrison was unable to say how many refugees will end up in Cambodia.

"Only time will tell," he said. "And it'll be based on the success of the programme over time."
Share to
Tags
Australia ، refugees ، Cambodia ، asylum seekers
Your Comment