Baku, YJC. Director of the Socio-political Department of Azerbaijan’s Presidential Office Ali Hassanov says it is time to launch the international association of Muslim journalists and editors with Iran and Azerbaijan which can be proactive and progressive.

Speaking to a group of Iranian journalists in Baku, he said "Currently things happen in Islamic countries which are mostly covered by Western channels such as BBC and CNN, which follow their own interests, putting Muslims against each other as enemies by the way they cover news.”

Hassanov added "It has been a long time since launching a friendship association for Islamic countries' journalists was due. Previously he have formed the Turkish journalists' association as well as the Russian-speaking journalists association which convened a while ago in Kyrgyzstan."

He also pointed to the importance of Iranian investors in Azerbaijan, adding "The Iranian and Azeri nations are one. Right now 6 thousand nationals from both sides are married to ones from the other nationality. Let me say this that Azerbaijan can be regarded as a homeland by every Iranian. Iran and Azerbaijan are pioneering countries with long joint borders."

Stressing that his country is ready for foreign investors, Hassanov stated "The Republic of Azerbaijan has thorough plans for that. In the past years, we have built 35 5-star hotels and we intend to increase our tourist attraction from 2 million to 10 million people per year."

"For that, Iran and Iranian investors have a special place, having built the largest tourist hotels."

"In the past three years, the two countries have been expanding relations. Every day thousands of our nationals travel to Iran to use the country's medical services."

Right now 10 to 15 thousand Iranian tradesmen are active in Azerbaijan, and this is something that has a direct impact on the relations of the two countries, the official asserted.

He further said "In areas that we lack expertise, Iranian experts have imported the knowhow. For example, Iranian filmmakers are the main directors of Azeri films."

"Iran occupies a special place in helping us in tourism, trade, and construction. The first 5-star hotel in the country was made by Parviz Beik, who is an Iranian investor. Also, the Flame triple towers which are in fact symbols for Baku were built by Abdelbari Guzel, who is an Iranian living in Turkey." 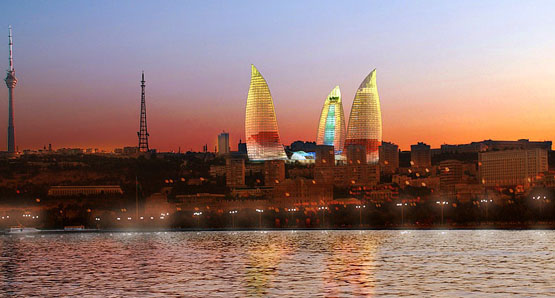